I've been increasingly dissatisfied with the covers of some of my books, but in a couple of cases the technology wasn't quite up there with what I wanted when I did them.  And in the cases where it was, unfortunately my hardware very definitely wasn't!

Anyway, over the course of several weeks I've been revising the covers, and I'm fairly satisfied with the results.  (Well, until maybe a year from now...!)  Additionally, I've updated the interior layouts of all four books with proper back matter - I suppose I should stop hiding that I wrote four stories, right? - which proved... interesting. 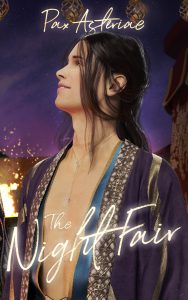 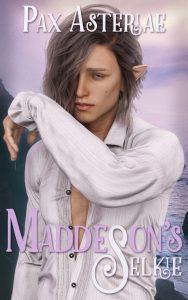 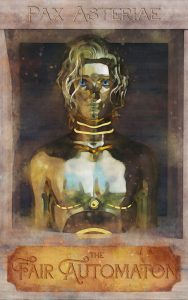 The 'several weeks' in question mostly refers to the amount of time it took to render the images.  My computer, albeit newish, isn't a dedicated render machine; I bought it for playing games I already owned, because I didn't anticipate falling back in to 3D work again. Poor thing hasn't quite grasped what's happening to it yet, but it does the very best it can which, if you give it enough time, is as good as any of the flashier machines with far more advanced graphics cards.

And then, to add insult to many, many days' injury, is that once I'd finished all the covers (and worked out which ones I was supposed to be using for The Fair Automaton) the ebook files kept throwing all kinds of mysterious wobblies.  Images would vanish from inside them, mostly, or suddenly pretend they weren't there when they were. I had to move them all to a cloud drive to keep them in line.

And speaking of 'in line,' I think these are a little more in line with what people expect from the genre. I can't really see them leading to any change in sales, but I'm much happier with them for myself, which is probably more important.  Not, like, a lot more important, but still.

The only thing I'm a little irritated about is that I really, really liked the new cover for The Night Fair, particularly Iphre's hair... but now I've finished, I actually prefer Maddeson's Selkie.  I'm sorry, Iphre!  And the cover for The Fair Automaton is a lot more in line with what I'd wanted - if it hadn't worked out, I'd have gone for a picture of one of the characters leaning over a wooden railing, a scene that happens in the story. But I'd feel a little like I was betraying the plot, since it's the machine itself that's so important to the story, and to North's confused feelings.

What's harder to see in the cover for The Fair Automaton, but what amuses me mightily, is that part of the reflection visible in the automaton's body is actually North.

Well, I suppose you've got to take your enjoyment where you can, right?