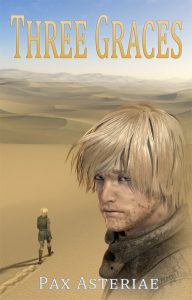 David is a naïve and Talented man and this makes him wanted — by all the wrong people.

​Cas is a mercenary, a job he relishes, and will take any assignment for the right fee.

​Some things can't be outrun, particularly when those you're trying to outrun have more resources than you could dream of, but nothing's going to stop David from trying.  Except, just maybe, Cas.

“You’re sending me after a ghost.” It was said without emotion, but the expression on the big man’s face told another story.

“Whatever you may think,” he retaliated sharply, hoping his tone didn’t give away his relief that the sturdy desk lay between them, “this man is not a ghost.”

The long silence that followed was only interrupted by the gentle chink of metal on metal as the visitor shifted his weight from side to side.

Maybe ‘visitor’ wasn’t quite the right word. He stared intently at the standing man, who returned the look with a flat glare. Ademza Cas owned the space he was standing in. An insistent little voice at the back of his head began to question whether this was the right course of action; the cold sweat he was failing to suppress insisted it probably wasn’t. “We thought we had... disposed of him some years ago.” He finally broke the silence. “However, it would appear that we were mistaken.”

“And that’s why we need you.” He concluded lamely, shifting around papers on his desk and concentrating on them rather than the man in front of him. “Deor slipped through our fingers once. We don’t want it happening again.”